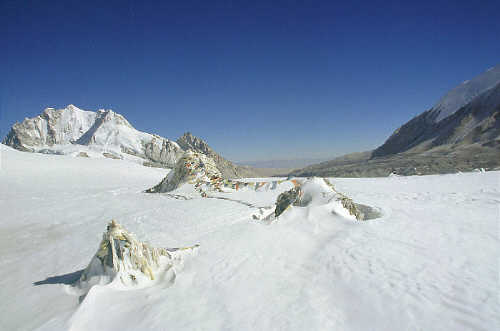 I was shocked to read this post over at Everest Is Ours today. Word has come in from the Tibetan Centre for Human Rights and Democracy that there have been more shootings in Nangpa La Pass.

The report sounds eerily similar to the events that occurred last year in which an unarmed party of refugees fleeing Tibet into Nepal were fired upon by Chinese soldiers. The incident resulted in a number of arrests, including some small children, and the death of a young nun.

This new report says that 46 Tibetans were using the pass to one again flee into Nepal. The Chinese Border patrol again fired live ammunition at the refugees, who scattered in fear, leaving their possessions behind. The incident occurred on October 18th, and three people were arrested, and nine are still unaccounted for. No one is believed to have been shot to death at this point, but it’s hard to say what the fate of the nine missing people is. The other members of the group managed to safely reach Kathmandu.

The Washington Post has also picked up the story and they are reporting that seven people, including a sick, elderly man, were captured before the shooting began. Of course, the Chinese are denying the whole affair.

I’m sure we’ll hear a lot more about this story in the days ahead, as the Tibetans involved come forward to tell their story. Considering what happened last year, I didn’t think I’d be posting anything like this again so soon. The Chinese are trying to remain on their best behavior as the eyes of the World turn on them for the Olympics next year. Considering their track record though, I’d be willing to bet that this story is closer to truth than they would care to admit at this time.