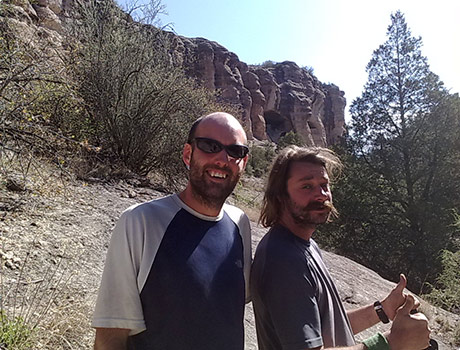 Cookie and Paul from Made In England by Gentleman are two chaps after my own heart. First of all, they clearly have a sense of adventure about them, as they have embarked on the epic journey of hiking the entire length of the Continental Divide Trail, which in and of itself would earn them major kudos from me! Turns out though, that they also happen to be fans of this blog. Well, maybe calling them fans might be a bit much, but at least they have me in their blogroll, and for that I’m eternally grateful! 🙂

Back in 2000 Cookie and Paul decided that they were going to do the CDT in 2008 and now they have stuck by their word and embarked on their hike to raise funds and awareness for the Cystic Fibrosis Trust. You can sponsor their efforts right here.

The Continental Divide Trail is 3000 miles in length stretching from the Canadian border to the Mexican border in the Western United States and running right through some of the most beautiful sections of the Rocky Mountains that you could ever hope to see. The boys estimate it will take them about six months to complete and you can follow their progress on the Were are Cookie & Paul” page.

I love their reason for selecting the CDT and 2008 as the year they would do it. This says it all:

The reason we choose it was purely because it was the longest walk we could find any information on, the reason we picked 2008 was because we had no money and thought by now we’d have all our student debt paid off!

Seems perfectly logical to me!! Good luck guys! I’ll be following your efforts.

3 thoughts on “Hiking The Continental Divide Trail For A Cause!”