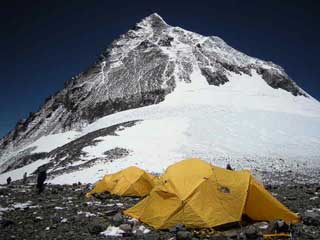 Lots of action today on Everest as winds have abated enough to allow the climbers to make the first mass push to the summit of the season, with the big teams already making their bids. Updates have been coming fast and furious in the past few hours and I expect them to continue into the evening.

If you’re following the climb then make sure you head over to Alan Arnette’s Everest 2009 page for the latest news and updates. Alan has been closely monitoring the activity all day and has already made two new updates since this morning. Allan is reporting that more than 100 climbers are on their way to the summit at the moment. The trail is reportedly in good condition and mostly free from snow. Alan also notes that a Japanese team has already reached the summit from the North Side today, lest we forget that there are teams on both sides of the mountain.

I have received two updates from the Adventure Consultants team today, the first announced that the team had left C4 for the summit, and the second, most recent, has them now above the Balcony. One of the Sherpas reported into BC that the team was progressing very well, the weather was great, and the trail very easy. (Relatively speaking of course!)

Meanwhile, the First Ascent Team has sent their first two climbers to the top with Ed Viesturs and Peter Whittacker now above C4. Obviously these two guys have a ton of experience, and if anyone will top out today, it will be Ed and Pete. They are reportedly about 3-4 hours behind the crowds that set out ahead of them.

Some of the other teams are holding off and letting the crowds pass through. For instance, IMG is about a day behind the current group, hoping to move up to the South Col tomorrow. Likewise, the Eight Summits team has posed their schedule, and they look to top out this coming weekend, and the Himex Team seems to be biding its time as well. Of course, both Himex and Discovery are being shadowed by the Discovery Channel climbing crews too.

Everyone hold tight. The summits are finally upon us, and we should be hearing a lot of reports later in the day. It’s presently, as I write this, about 3AM in Nepal, with some hours to go before the teams stand on top of the world. But it seems likely that many will do just that in just a short time.

Everyone climb safe, enjoy the view, and remember that the summit is only half-way home.