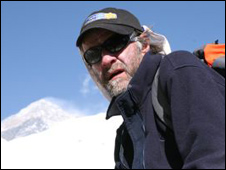 Yesterday was another very busy day on Everest, with reportedly more than 100 climbers going to the top from both the North and South sides of the mountain. The major teams have put at least one group on the summit now, and the weather has been outstanding the past few days. All of the climbers who went to the summit deserve a hearty congratulations for sure, and hopefully they’re all getting down safe today. But there were two summits in particular that I wanted to spotlight briefly.

First, Apa Sherpa claimed his 19th successful trip up Everest, reaching the top while guiding a team up the mountain. That extends the record that he already held, and continues his amazing streak of 19 straight years of reaching the Top of the World. Simply outstanding. This article in the Salt Lake Tribune has more details on his climb. Apa notes that it was very busy and crowded on the mountain, with traffic jams at the Hillary Step, but he eventually reached the summit none the less, where he unfurled a flag that read: “Stop Climate Change, Let the Himalayas Live!” Congrats Apa, you’re in inspiration to us all!

The other summit of note is from Sir Ranulph Fiennes, who reached the summit on his third attempt on the mountain. For the legendary British explorer, this is his “third pole” having already reached both the North and South Poles on previous adventures. In his two previous attempts, Ran was a bit more at the center of attention, as he climbed for charity and the media followed his every move. This time he stayed more under the radar, and concentrated on the climb, and it seems to have payed off well, although he was still climbing for the Marie Cuire Cancer Care fund, a charity near and dear to his heart. Personally, I was aware that he was in BC, but received no other news of how his climb was going.

The 65 years old Fiennes is said to have been very happy to have reached the summit, but is quoted as saying that he “felt dreadful”, which is not at all uncommon for exhausted, sleep, and oxygen deprived climbers. Hopefully he is back down safe and sound this morning, and most likely planning his next adventure. Congrats Sir Ran! You’re an inspiration as well!

More great stories from Everest to come I have no doubt.