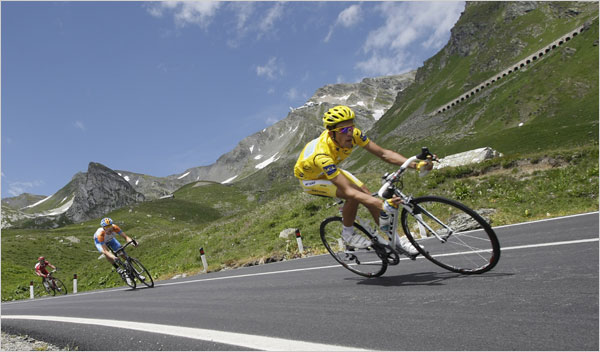 Coming off a rest day on Monday, the riders of the 2009 Tour de France were prepared for a long and challenging day in the mountains. Today’s stage 16 was a 159km (98 miles) jaunt from Martigny to Bourg-Saint-Maurice that featured two huge climbs, the first a beyond category beast and the second, a category 1 climb that provided fireworks at the top of the General Classification, but in the end resulted in no significant changes in the chase for the Yellow Jersey.

The stage got off to a busy start with a large breakaway on the slopes of the Col du Petit-Saint-Bernard, the first climb of the day that led the riders out of Switzerland and into Italy. While there were a number of riders in the break, none of them posed a real threat to the Yellow Jersey, currently on the back of Alberto Contator, so his Astana team didn’t have to chase down the pack.

Where things started to get a bit more interesting was on the second climb of the day, the Cat. 1 Col du Petit-Saint-Bernard. At that point in the race, there were a couple of riders still away on the break, but the real battle for standings in the GC began when Andy Schleck made a move to gain some time on Contador, with Schleck’s brother Frank close at hand to monitor the chase. The group that went after Schleck included Brad Wiggins, Vincenzo Nibali, Contador and teammate Andres Klöden. Conspiculously missing from the group was Lance Armstrong, who was sitting in second place coming into the day. Other big names that fell behind included Fabian Cancellara, Thor Hushovd, Denis Menchov and Tony Martin, who had surrendered his White Jersey to Andy Schleck on Sunday.

Schleck put in a major effort, setting a fast pace up the mountain in an effort to drop Contador and gain precious time over the top. But Alberto would have none of it, and hung on Schleck’s wheel like he was out for a ride in the park. At no time did it appear that Contador was in any danger or dropping, and much like Sunday’s big stage win, he looked like the strongest rider on road.

One of the more impressive displays came when Lance Armstrong decided he had had enough of pacing the chase group and wanted to get back to the Yellow Jersey group. Lance shot off, leaving riders in his wake and covering the distance in no time. The burst showed that the 37-year old Armstrong still has strong legs and is in great condition, and put to rest any doubts that he’s lost much of anything in his three year absence from the Tour. It was an impressive display of riding.

Once the riders reached the summit of the Col du Petit-Saint-Bernard, they faced a dizzying 18km descent at high speeds that saw a number of nasty crashes including one that put Jens Voight onto the tarmac. By that point, Spanish rider Mikel Astarloza had made a daring dash to the front and was holding on for dear life as he rocketed down the slopes with the other riders in pursuit. In the end, he would hold on for the stage win, with a chase group not far behind, and the pack of contenders about a minute back. That group was led in by Dave Zabriskie, who did most of the work on the descent, setting a blistering pace.

So, at the end of the day, not much has changed really, despite a few bold attacks. Contador is still in Yellow, Lance is in second place, and Brad Wiggins is looking great in third. Thor Hushovd is in Green, and looks to have completely shut down Mark Cavendish’s dreams of winning the sprint points. Andy Schleck has a solid grip on the White Jersey now, and doesn’t look like he’ll be relinquishing it before Paris, and Franco Pellizotti is wearing the Polka Dot Jersey of the King of the Mountains. The biggest loser of the day was Cadel Evans, who lost time to Contador and has now fallen to 17th place over all. A bit disappointing considering his expectations coming in.

Tomorrow the Peloton faces a 169.5km (105 mile) ride from Bourg-Saint-Maurice to Le Grand-Bornand that will once again test the climbers and most likely see attacks on the Yellow Jersey. The stage features no less than four Category 1 climbs, with a Cat 2 thrown in for good measure, so the presence of the mountains is likely to shed the field once again. I expect Andy Schleck to make another attack, and if Carlos Sastre is going to have his presence known, he needs to make a move soon too, although the way that Contador is riding, I’m not sure that it really matters. Fans of the Tour are going to love these next few days though, as they are all tough with big mountain climbs, before the final individual time trial on Saturday.