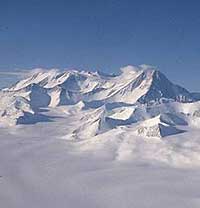 On New Years Day, a team of climbers sponsored by First Ascent, set out for Antarctica to take on the 4892 meter (16,050 ft) tall Mt. Vinson, the highest peak on the frozen continent. Over the next few weeks, we’ll be able to follow along with their progress via the Born Out There blog as they make the climb to commemorate the 45th anniversary of the American Antarctica Mountaineering Expedition.

The team consists of First Ascent guides  Peter Whittaker, Ed Viesturs, Seth Waterfall, Caroline George, and Jake Norton, who will be joined by videographer Kent Harvey who has been given the task of chronicling this adventure. From what I understand, the climbers have all gathered in Punta Arenas, Chile and are now waiting a flight out to Antarctic, where they’ll begin their climb. That flight is expected to happen tonight, weather permitting.

It’ll take a few days before they arrive at Vinson and begin their climb in earnest, but expect to hear a lot about this expedition throughout January. If previous First Ascent coverage is any indication, we will probably get one of the best looks at climbing the mountain ever, including stories from the mountaineers, video updates, and lots of great photos as well. Considering the remote nature of Vinson, it is probably the least well known of all the Seven Summits, so this should be a fantastic look at what it takes to climb at the bottom of the world.

Stay tuned for more updates. Meanwhile, check out the video below of Ed Viesturs getting ready for Antarctica.

2 thoughts on “The First Ascent Guides Are Headed To Vinson”