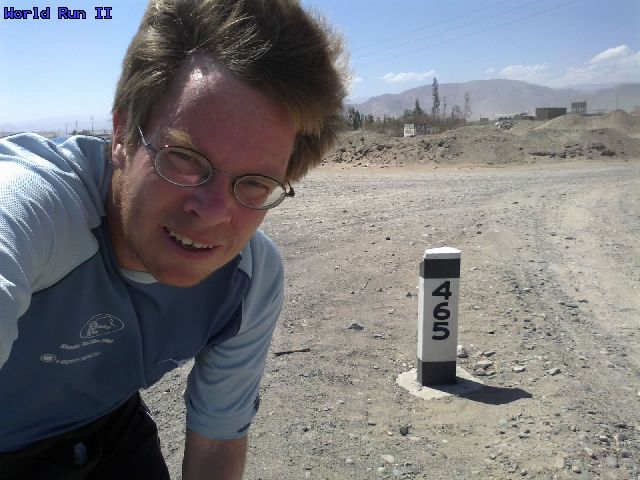 I was reminded earlier today by my friend Darrell Raubenheimer, who organizes the terrific Rhodes Run in South Africa, that I hadn’t posted an update on Jesper Olsen and his World Run II in awhile. Turns out Darrell was right, I haven’t written about Jesper in nearly a year and a half, and since that time, he’s continued to make tremendous progress.

For those that don’t remember, World Run II was the Danish ultrarunner’s attempt to run more than 40,000km (24,855 miles), fully documenting and tracking his progress via GPS. The run began at the northernmost point in Finland and continued south across Europe, into Turkey and onto the Middle East, then into Africa, before finally running out of land in Cape Town. From there, Jesper jumped across the pond, and turned his way north at last, resuming his run in Punta Arenas, Chile. He has since made his way into Argentina, and now Peru, as he continues to make steady progress towards the top of South America. From there, he’ll cross into Cuba, run the length of that island, then move on to the United States, where he’ll travel from Miami to the tip of Nova Scotia, Canada, his eventual finish line.

Along the way, Jesper has been posting updates from the field and sharing information and photos on his progress. He is now into his 30th day in Peru, and while he has experienced stomach issues (something that plagued him throughout Africa as well), he continues to make steady progress. In his last dispatch, he was running near Nazca, Peru, home of the famous Nazca lines, where he mentioned he was hoping to find a good hotel where he could rest up for a few days, and let his stomach ailments pass.

When I’ve written about the World Run II in the past, I’ve always been in awe that anyone would undertake such a journey on foot. Of course, this isn’t Olsen’s first long distance run. As you might have guessed, he has the World Run I under his belt as well, during which he quite literally ran around the world, covering 26,232 km (16,300 miles) in the process. The sequel to that run is much longer of course, and, it seems, more demanding as well.

I’ll try not to take so long between updates next time. Obviously Jesper still has a long way to go and will be experiencing some interesting things as he continues. Reaching Cuba should definitely be an interesting milestone. Oh, and for the record, he has so far run 27,346km (16,992 miles). I’m not sure my car has that many miles on it!