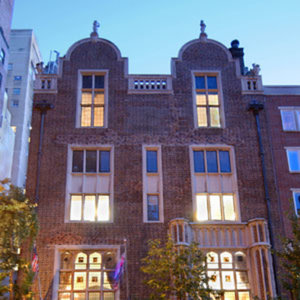 Yesterday I posted another story in the ongoing saga of the internal disputes that are taking place inside the Explorers Club, the 108 year old institution that has been at the forefront of exploration and adventure since its founding. In the story I quoted a New York Post article which stated that EC member Josh Bernstein, who also happens to be on the Club’s Board of Directors,  was “censured and fined” because he accepted tickets to the Club’s annual Patron’s Dinner from the event’s sponsor, Rolex. Turns out that isn’t altogether accurate, and as with all things in this story, there is more to tell.
Last night I heard from yet another source that Josh did indeed buy his own tickets to the event, but was invited to sit at the Eddie Bauer sponsored table, and not Rolex as the Post story indicated. As you would expect from a sponsor table, it was located closer to the stage, giving it a more prominent position at the event. That also means that tickets for that particular table actually cost more than a standard member ticket, which is what Josh purchased. It turns out Bernstein was disciplined not for receiving a free ticket to the event from a sponsor, but for the difference in price between the ticket that he purchased and the cost of one for the table where he actually sat. And remember, this so called inappropriate gift came about because Eddie Bauer execs in attendance at the event actually asked him to sit at their table in the first place.
Of course, a lot of clubs and organizations have rules about what members and directors can accept in terms of gifts and comps, and they are usually spelled out pretty clearly in the bylaws. For obvious reasons, you don’t want officers and board members having inappropriate relationships with donors/sponsors. But I’m told that in this case, it was not at all unusual for members and directors to sit at sponsor tables at events in the past, and no one thought twice about it. It wasn’t until President Lorie Karnath called out Bernstein for accepting the invitation that this suddenly became an issue.
So why was Josh Bernstein singled out in this case? Should he have been called on the carpet for not having paid full price to sit at the Eddie Bauer table, particularly when they asked him to be there? Or is there some truth to the stories that Karnath made the move to fine and censure him in an effort to prevent his re-election to the Club’s Board of Directors in 2012. That’s exactly what member Ken Kamler told the Post yesterday in their story.
Either way, I wanted to clarify the situation, as it varies slightly from what the Post reported, and I repeated yesterday. When these details ware conveyed to me, I thought it was important to pass them along.