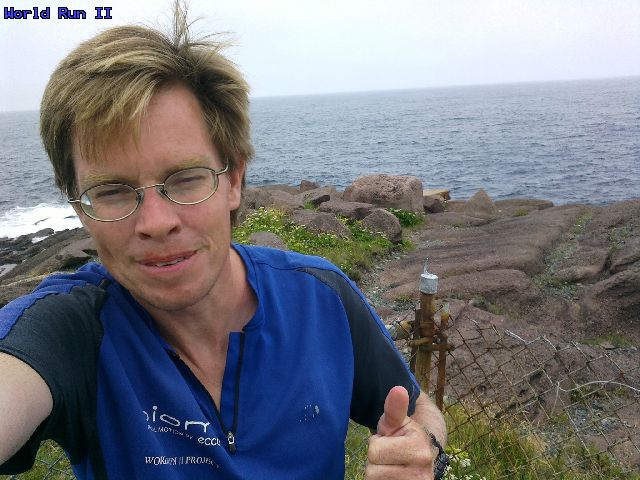 Over the past couple of years I’ve written on more than one occasion about Jesper Olsen and his World Run II, the epic follow-up to the World Run, which Jesper completed in October 2005. On that test of endurance Olsen ran around the world, east to west, covering 26,232km (16,300 miles) in the process. For World Run II, the Danish endurance athlete wanted to set the bar even higher, aiming to cover nearly 40,000km (24,854 miles) as he ran from the northernmost point in Europe to the tip of South Africa before hopping across the ocean to South America and running north to New Foundland in Canada. A few days ago he reached his finish line at last, bringing an end to the longest fully documented run ever.

As I write this, Jesper is already back home and no doubt enjoying some much needed rest. But on July 27 he ran the final 200km (124 miles), mostly in rain and fog to reach the tip of Cape Spear along the Atlantic coast. His final GPS reading for the run? A staggering 36,896.8km (22,926.6 miles). That number is likely to be well off the mark however as his tracking device wasn’t capable of handling more 99km at a time. That means the final tally is likely to exceed 37,000km (22,990 miles).

In his dispatch announcing the completion of the run, Jesper said that he is looking forward to getting back to his “normal” long distance running routine, namely 10k’s and marathons. He also announced his retirement from these kinds of long distance endurance runs. His resume includes the first east-west run around the world and the first north-south run as well. He’s also the first person to complete two runs around the world, racking up a mind boggling 63,000+km (39,146 miles) in the process. Whew! My legs are tired just thinking about that.

Huge congratulations to Jesper on this amazing achievement. I do hope he arrived home safely and is enjoying some time in an easy chair in front of the telly. He’s definitely earned it.

As always, major thanks to Darrell Raubenheimer for keeping posted on Jesper’s progress. Much appreciated mate!

1 thought on “World Run II Update: The Run Is Done!”