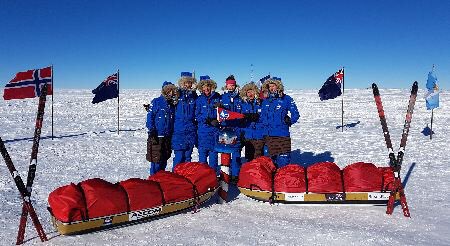 The Antarctic expedition season began way back in early November, and we’ve been following along closely ever since. On Sunday we had our first arrival at the South Pole however, which is a major milestone. But what was once the finish line for so many teams is now just the halfway point on much longer journeys, with explorers and endurance athletes pushing themselves even further across the frozen continent.

It was the Ice Maidens who marked their arrival at 90ºS on December 17, arriving 26 days after they set out on their 1700 km (1056 miles) expedition to traverse the frozen continent. They planned to spend a full day resting at the Amundsen-Scott Base located at the Pole before they continued on their way.

This milestone is a major one of course, and no doubt brought plenty of encouragement to the six ladies who have undertaken this historic journey across Antarctica. But the South Pole is only 577 km (358 miles) into their crossing, so they still have a very long way to go. They’ve also faced grueling conditions along the way, with -50ºC/-58ºF temperatures, high winds, and whiteout. Additionally, several of the women are also suffering from polar thigh, a condition that results from over exposure to the cold, giving rise to painful bumps and blisters.

Still, the members of the team are ready to continue on and should have hit the trail again today. They resupplied at the Pole and will pick up another supply cache en route to their finish line. They are racing the clock somewhat, as the final flight out of Antarctica is expected on January 30 and since they had a two week delay to their start due to weather, there is little cushion remaining in their schedule. We’ll keep you posted on the team’s progress.

Elsewhere, the Antarctic Ghurka Scott Sears continues to make solid progress and now hopes to arrive at the South Pole in time for Christmas Dinner next week. He’s now been out on the ice for a month, and is routinely knocking off about 30 km (18.6 miles) per day. A few days back he wandered into a massive sastrugi zone that has made it tough going, but once he clear that and passes the 88th degree, it should be clear sailing to 90ºS. The zone between the 87th and 88th parallels is well known for being extremely difficult thanks to its surface conditions, but Scott should clear that area in another day or two and start picking up steam again.

Other teams are chipping away at their respective routes as well. Rob and Barney Swan are now 300 nautical miles (345 miles/555 km) from the South Pole, while Ben Saunders now faces 532 miles (856 km) until he reaches his exit point. The Spectre team is on their return trip now and has a brutal 1367 km (849 miles) to go before they’re done. That said, with some help from the wind and their kites, they may be able to cover that distance pretty quickly.

Stay tuned for more updates from the frozen continent.