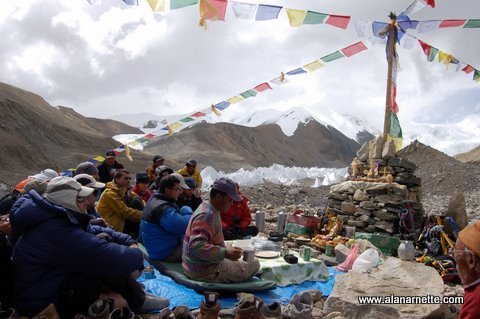 Alan Arnette has posted a pair of dispatches from Shisha Pangma to update us on his progress and give us even more of his unique insights into life on the mountain.

The first dispatch is entitled Advanced Base Camp, which is obviously his location on the mountain when he made the post. The team made the 10 mile hike from BC to ABC, gaining more than 2000 feet in the process, and taking the expedition from a trek to an actual climb. As has been the case so far, the dispatch is accompanied by a number of nice photos, and Alan does a great job of describing the landscape at ABC.

The second dispatch is also a fascinating read with Alan going into detail about their Puja Ceremony, which truly does mark the end of their hike and the beginning of their climb. The Sherpas believe that you can’t go up the mountain without receiving a blessing from the mountain itself, and the ceremony asks for safe passage while climbing. I found it interesting that the team’s ice axes and crampons had their sharp edges coated in Yak butter to ask forgiveness for the holes they would inflict on Shisha.

After the Puja, Alan and his team begin the long process of hauling gear to the higher camps. They’ll be establishing C1 and 2 over the next few days, acclimatizing at the same time. Alan reports that he is feeling good, is moving well, and has now gone above 19,000 feet. Progress has been steady and sure so far.

From here on out, dispatches will be made via a PDA and satellite uplink, which means fewer photos, but continued insights throughout the climb. I like Alan’s posts as they are very different from the dispatches we see from most teams. He injects some life into his notes from the mountain, sometimes describing things more like a poet then a climber. It helps to set the stage and make us understand what it’s like there, while also making us feel like part of the expedition itself.