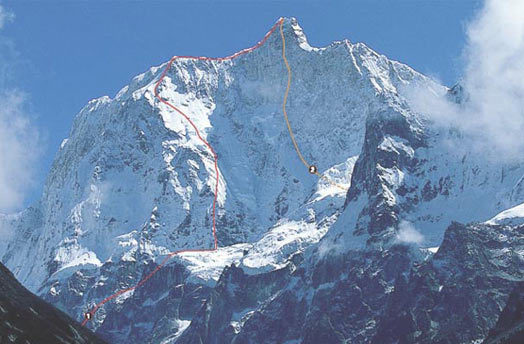 Sergey Kofanov and Valery Babanov have begun their assault on Jannu according to MountEverest.net. The two set off from BC yesterday and made their first camp at 5500m. From there, they’ll climb up to 5700m and make their way to the saddle, crossing the plateau in the process, where at long last they’ll being their new route up the West Ridge of the mountain.

The new route won’t be an easy one however. The two men estimate the length of the route to be about 3km in length, and will take somewhere in the neighborhood of 8-9 days, if the weather window holds. However, this has been a strange Fall in the Himalaya, and Jannu resembles the other big peaks in the region right now, with heavy snow on the mountain. It’ll be tough going breaking new trail at higher altitudes. On top of that, the sun never touches Jannu’s North Face in the Fall, which could make for some cold conditions right now, but may also add some stability to the snow.

Jannu is a 7710m peak located near the border of Nepal and Sikkim. It’s summit pyramid is notoriously difficult to climb, with steep approaches on all sides. The North Face is a 3000m monster divided into three parts. It starts with a 1000m long rock pillar, followed by a section of rock and ice, capped off with a 1000m big wall starting off at about 6700m. The ExWeb article notes that the face has been called “the greatest challenge of the Himalaya” by more than one climber.

If all goes well, Sergey and Valery will be looking to top out sometime early next week. Lets hope that the weather stays calm and the deep snows remain stable. If those things happen, the two men have a chance at climbing history, and it would be an amazing thing to see.