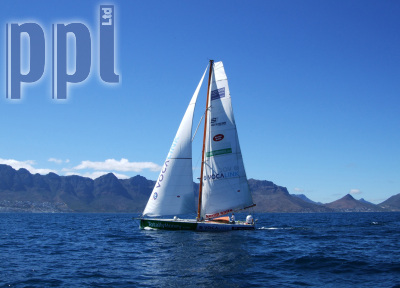 The race to be the youngest person to ever sail solo around the world continues, but the bar has now been set even higher, or in this case lower I suppose. British sailor Mike Perham reached the end of his circumnavigation attempt yesterday, successfully completing the 28,000 mile journey in just nine months time. He now lays claim to the title of youngest person to sail around the world, besting Zac Sunderland, who finished his circumnavigation in July, by just a few months.

Perham made his voyage aboard a 50-foot yacht designed for racing named the TotallyMoney.com after his major sponsor. This is a bit of a contrast from Sunderland, who purchased and restored his own 36-foot boat, and mostly funded his journey himself. Still, Perham did face plenty of challenges along the way, including a broken auto-pilot and incredibly difficult weather conditions.

Interestingly enough, Perham and Sunderland crossed paths on their journey, bumping into one another in South Africa. I’d guess that was quite an interesting conversation, sharing notes and thoughts with one another. They’re both in an exclusive club of young circumnavigators, and Perham even stopped off to visit Jessica Watson in Australia on his way past. At 16 years of age, she hopes to set off later this year for her own attempt to solo sail around the world.

Of course, if 13 year old Laura Dekker has her way, she’ll be the one going after the record soon. I still contend that 13 years old is too young to go on a solo voyage around the world, but we’ll see how that plays out down the line I suppose.