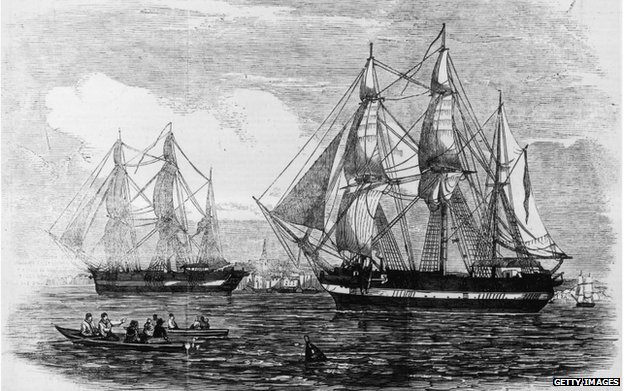 Back in 1845, famed British explorer Sir John Franklin set out to find, and navigate, the Northwest Passage. With him he took two ships, and 129 men, with the hopes of discovering a way to sail across the Arctic from the Atlantic Ocean to the Pacific Ocean. Not long into the expedition, Franklin, his men, and the ships disappeared, creating one of the great mysteries of that era. Now, one of the ships has been found, shedding some light on what became of the crew.

Today, the Northwest Passage is a very real navigational route that opens for a few months each summer. Climate change has warmed the Arctic enough that the ice that once kept the Passage permanently sealed now gives way for ships to pass through. In Franklin’s day however, the route was mostly a myth that a few explorers raced to discover. Sailing the Arctic Ocean in that era was a treacherous affair, fraught with uncertainty.

Franklin’s ships were named the HMS Erebus and HMS Terror. Exactly which ship has been located is unclear, but a team of explorers using sonar have found, and positively identified, one of the vessels at the bottom of the Victoria Strait. They believe that locating the first ship will provide some clues as to where the second can be found as well.

When Franklin and his ships went missing, a major search operation was launched by the British Navy. From 1848 to 1859, numerous expeditions ventured into the Arctic with the hope of locating the explorer and his men. When the hope that they could still be alive faded, the search continued to discover the fate of the crew instead. Unfortunately, no trace was found, and what happened to them remained a mystery. Over the years, there have been more than 50 attempts to find Franklin’s ships, but little progress was ever made. In the 1980’s, three bodies that were believed to be a part of the crew were discovered, and they contained high levels of lead in their system. That led to the theory that the sailors were poisoned by lead from the cans that contained their food. The Canadian government launched its own search back in 2008, and this latest expedition was an extension of those efforts. They were finally successful just a few weeks back.

Finding the ship sheds a bit of light on what happened, but it doesn’t tell the entire tail. It is believed that the two vessels became trapped in the ice, and were slowly crushed under the weight. The crew more than likely had time to abandon ship, and escape onto the ice, where they no doubt faced a difficult challenge for survival. The local Inuit tribes, which had referenced the location of the ship for years, say that the men resorted to cannibalism in an attempt to survive. Eventually, they would all succumb to cold and starvation.

Locating the ship brings a bit of closure to one of exploration’s great mysteries. We will probably never know the full tale, but at least there are some indications of what happened to the crew.